Over £32,500 of lost or stolen keys have been returned to Suffolk SAFEKey members. 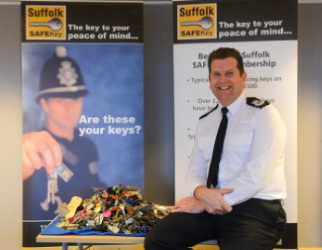 What our members say about SAFEkey

Self-praise is no recommendation, don’t take our word for it!

Suffolk SAFEKey is a brilliant and excellent service. My keys were returned within 24hrs.

My wife was walking our dog nr the River Thames and lost our keys through a hole in her pocket. The keys were found and returned quickly. I believe the finder was pleasantly surprised to receive a £10 reward.

The system works like clockwork; it is a very simple process to join. I am very grateful to this service and will be renewing my membership in the New Year before it is due to expire.

My keys have been lost & returned twice now through Suffolk SAFEKey. On the first occasion a dog walker found them and they were returned within 24hrs. On the second occasion they had fallen out of my rucksack and found in town. I was informed that the keys had been found before I realised I had lost them.

So I would say “Suffolk SAFEKey does exactly as it claims”. It’s a great service which gives me every confidence of having my keys returned if lost.

Absolutely thrilled with the service Suffolk SAFEKey provides. I had lots of keys on my key fob. It was once I had lost them that I realised how inconvenient it was not to have them.

Luckily after a couple of days they had been found and were returned to me. After realising the value of this service I renewed my membership to ensure the return of them, if this ever happens again.

Suffolk SAFEKey is an efficient service, I was notified that my keys had been found before I realised I had lost them.

It’s a brilliant service that has saved me a lot of money and concern. Knowing what a valuable service it is I have renewed my membership. Also I am pleased that by doing this my money will be granted to grassroots charities across Suffolk through the Safer Suffolk Fund.

I was delighted with the service I received from Suffolk SAFEKey when I lost my keys, in fact the service phoned me before I knew I had lost them.

I am a big fan of Suffolk SAFEKey, especially as money generated supports Suffolk charities. It’s an excellent scheme that I would recommend!

When I lost my keys they were quickly returned through Suffolk SAFEKey.

Having my keys returned saved me hundreds of pounds as I would have had to replace 6 sets of house keys & locks.

For just £1 per month the scheme offers great value.

Suffolk SAFEKey saved me a lot of money and worry by returning my lost keys. It is a very efficient service for just £1 per month. 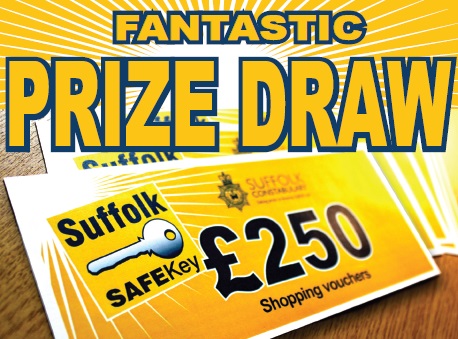 Click here to join today for a chance to win £250 in shopping vouchers.
Did you know the average cost of replacing keys on a fob and associated locks is £500? For more information please click here.